Jeffery Hoffmann is a teacher, coach, and combat sport journalist, photographer and podcaster from New Orleans, Louisiana. He has been an avid fan of mixed martial arts and Brazilian jiu-jitsu for nearly two decades. Along with being a lifelong athlete and dedicated bodybuilder, he graduated with a degree in communication and English literature from Southeastern Louisiana University in 2007. Having lived and worked in five countries and on three different continents, he has seen MMA and combat sports through the eyes and experiences of people all around the world. 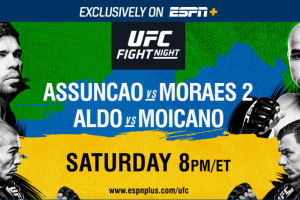 Raphael Assuncao (27-6) vs. Marlon Moraes (22-5-1) What a night of vengeance for the underdog Marlon Moraes! Having fallen just short in the first bout by split decision, Moraes took the night, and Assuncao, in his hands and squeezed both for all they were worth. Both fighters came […]