The UFC featherweight division is as exciting as it’s ever been, as they keep acquiring new talent and adding depth to it. The UFC added the 145 lb weight class back in the end of 2010 when they absorbed the WEC, and it’s grown beautifully since. There are so many new faces and so much more talent now than ever before, and not just strikers. However, in this article, we’ll go over ten exciting strikers that have found themselves fighting in the UFC featherweight division. Some are new and unknown to most, others have been with the promotion for a few years, but just recently started coming into their own. 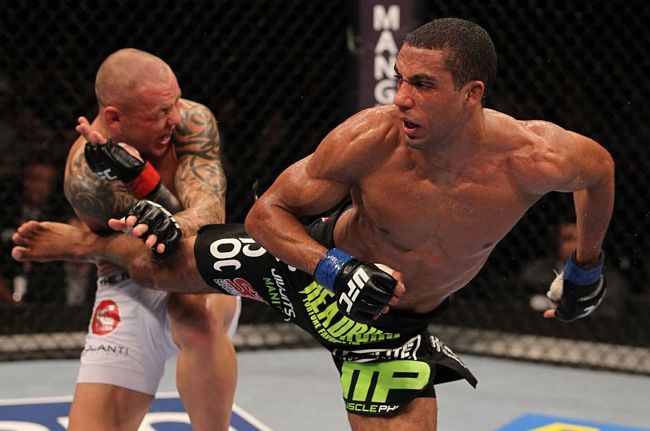 Edson ‘Junior’ Barboza just made his 145 lb debut at UFC on ESPN 8 against Dan Ige, and he looked pretty good at this weight, despite losing the decision on two of the judges scorecards. This was the Brazilians second split decision loss in a row that most people thought he won, it’s a tough pill to swallow. So much work goes into each training camp, and to just have it taken from you, it’s unfortunate. Barboza stands 5’11” and boasts a 75” reach, and he’s also 34-years-old now. He’s been through some real wars, hopefully he’s still got enough in the tank to go on a run at 145 lbs.

This marked his third straight loss, and he’s now 0-1 at featherweight. Similar to Jose Aldo, who’s an insanely talented striker that just moved down a weight class, only to lose a controversial split decision. He could still make some noise at his new weight however, now he knows how much energy he has fighting at 145 lbs. Barboza holds a 25-3 record in professional kickboxing with 22 knockouts, as well as holding black belts in both muay thai and taekwondo. 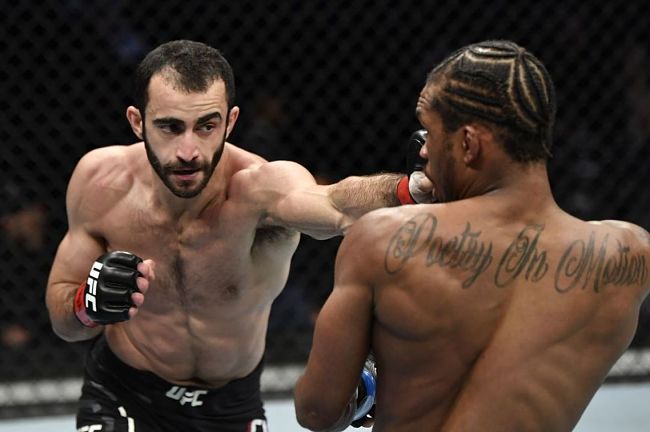 This man is a seriously talented striker. He started out his martial arts career learning Kyokushin Karate, achieving a black belt in the art before going to The Netherlands to learn the Dutch style of kickboxing. He fights just that way too, a beautiful mix of karate and kickboxing. Chikadze is 3-0 in the UFC thus far, winning his first two fights via split decision, and his most recent one via unanimous decision. These mark his only three decision wins in his MMA career. Chikadze stands 6′ tall and has a 74” reach, something that’s going to be a hard time for any 145 lb fighter to deal with.

He still has yet to put it all together inside the octagon, and perhaps he’ll be able to do that once he has a full camp of preparing for one opponent, considering he was supposed to fight Mike Davis all three times he fought in the UFC. Chikadze holds a 38-6 record in professional kickboxing with 22 knockouts, including a 6-3 run with the Glory promotion. He’s only four-and-a-half years into his mixed martial arts career, there’s so much more potential for him in the coming years. At 31-years-old, Chikadze spent much of his time during his youth only focusing on striking, but his takedown defense has come a long way, and seemingly no one is out-striking him. 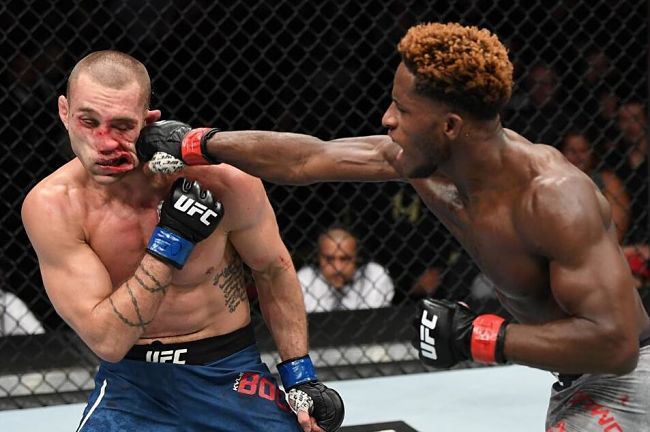 This Canadian prospect has all the potential in the world. ‘Mean’ Hakeem Dawodu has had over 50 kickboxing fights, going 42-5 as an amateur with 15 knockouts, and 9-0 as a professional with seven knockouts. He’s also finished seven of his mixed martial arts victories via knockout.

Dawodu finished his first six wins, and has only finished one opponent thus far into his UFC tenure. With a 4-1 UFC record, two of those wins were close split decisions, one was a clear cut unanimous decision, and he finished Yoshinori Horie via TKO with less than one minute left in the third round. He hasn’t lost since his UFC debut, where he was submitted by Danny Henry, but he has yet to really put it all together. At 28-years-old, he’s got time to evolve even more and become a huge star. Standing at 5’8” with a 72” reach, it’s going to be some time before we see anyone out-striking this prodigy. 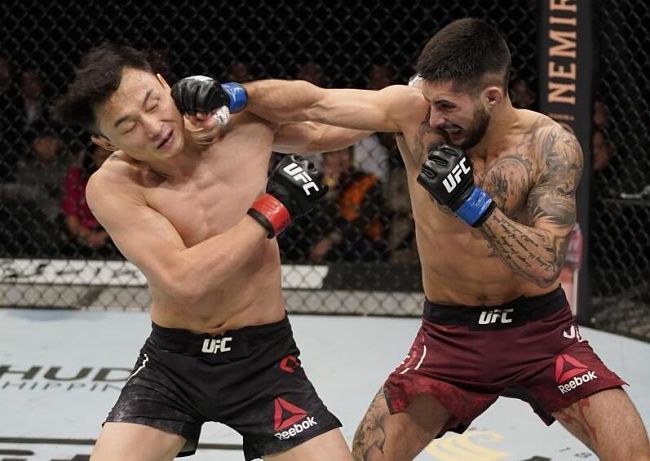 Charles ‘Air’ Jourdain is a very exciting new addition to the UFC’s roster. He came over to fight Desmond Green at UFC Rochester, and though he looked good during the fight, he got out-wrestled and lost the fight via unanimous decision. Despite being the former TKO champ-champ, holding titles in both the featherweight and lightweight divisions, Jourdain knew he needed to be in his natural weight class when fighting the very best in the world, so he dropped back down to featherweight after this.

He was then matched up with Doo Ho Choi, an insanely dangerous striker in his own right, and Jourdain TKO’d him toward the end of round two. No one expected him to beat Choi, it was a surprise to all of us. One thing that’s so exciting about Jourdain is the fact that he’s so young. At just 24-years-old, he’s going to be full of surprises in the years to come. He has at least six more years until he’s at his best, and considering how good he already is, that’s incredibly exciting. Jourdain stands 5’9” and has a 69” reach, boasting a perfectly even frame. 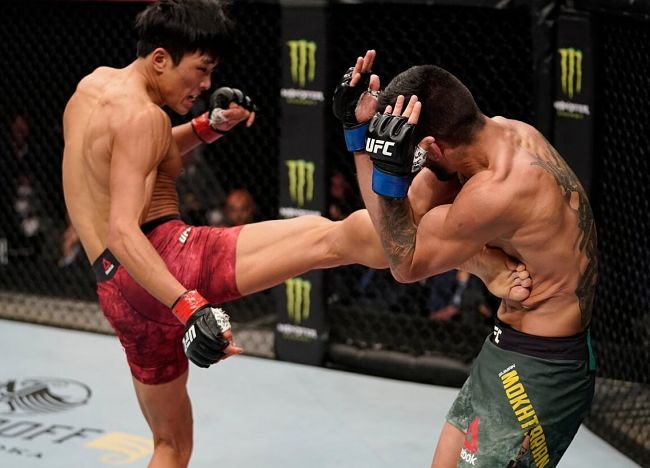 Seung Woo Choi had a bit of a rockier start to his UFC career, losing his first two fights with the promotion. However, he rebounded with a victory last December and is looking to continue piling those wins onto his record. Choi started out his combat sports career with muay thai, being a member of the South Korean Muay Thai National Team, and achieving a bronze medal at the 2010 Muay Thai World Championships. That’s quite a feat.

Choi eventually got into mixed martial arts, and within a couple years became a two-time TFC Featherweight Champion, as well as avenging his only loss before joining the UFC. Despite losing his first two fights with the UFC, he didn’t get cut, he’s still here. At just 27-years-old, Choi has a lot of time to continue improving as well, and with him standing 6′ tall with a 74.5” reach, mix that with his striking background and we’ve got a very dangerous featherweight on our hands. 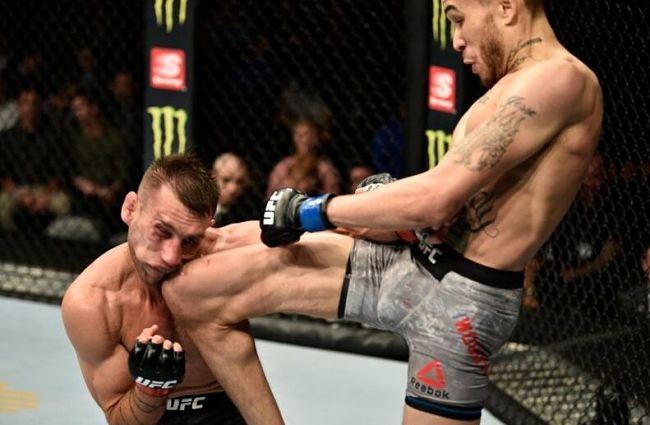 Most of us have only seen Sean Woodson fight once, or twice. He came to the UFC off his incredibly impressive win on the Contender Series, where he KO’d his opponent with a flying knee. He then fought Kyle Bochniak in his UFC debut, and man what a fight that was!

Woodson’s striking is such a beautiful thing to witness, because he has a ton of skills, and he’s 6’2” with a 78” reach in the featherweight division. That’s absolutely insane! He picked Bochniak apart to a unanimous decision victory, out-striking him 150-52, and stuffed 14 of Bochniak’s 15 takedown attempts. At just 27-years-old, it’ll be a lot of fun to see what he brings us in the future. 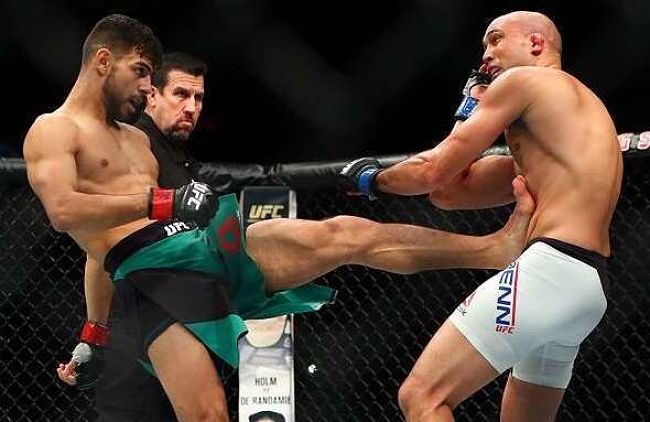 Yair ‘El Pantera’ Rodriguez isn’t particularly a new face in the UFC, or in the featherweight division for that matter, but he’s evolved and really come into his own recently. He’s The Ultimate Fighter: Latin America winner, where he finished both of his opponents on the show, and he holds an 8-1 (1 NC) record inside the octagon.

Rodriguez started training Taekwondo at the age of five, quickly acquiring a black belt in the art. That’s where his flashiness comes from, he’s one of the most entertaining strikers in the entire sport, and one of the most dangerous as well. From his head kick of Andre Fili, to his front kick of BJ Penn, to his Knockout of the Year winning elbow over Chan Sung Jung, ‘El Pantera’ is the real deal. He has also shown us he can go five rounds, twice. He’s still only 27-years-old as well, there’s so much more that he can show us in the years to come. Rodriguez stands 5’11” with a 71” reach. That’s a bit surprising, considering how lanky he is, but he makes it work for him. 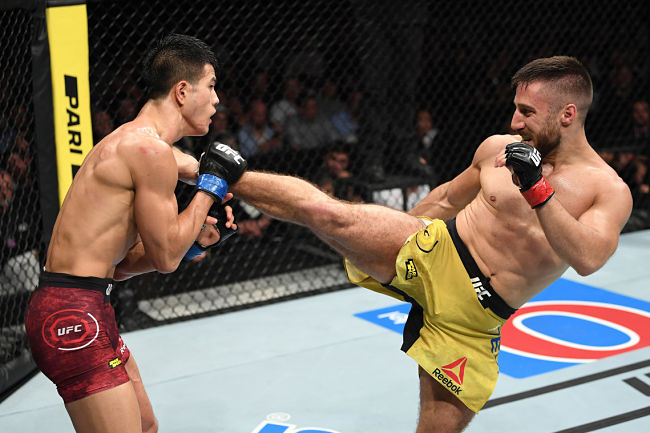 ‘Kid Dynamite’ isn’t really a new face in the UFC either, he’s been here since 2017. However, he’s only had five fights with the promotion, and he’s just 1-4 since joining, after starting out his career at 6-0. Daniel Teymur, like his brother David Teymur, started out his combat sports career with kickboxing, making it to 27-4 with five kickboxing and muay thai national championships to his resume. It’s surprising he hasn’t been cut by the UFC yet in all honesty, perhaps they want to give him every chance, especially considering his brother has had good success in the promotion.

It’s not like he’s not a good fighter though, he’s only lost to good fighters, such as Danny Henry, who submitted Hakeem Dawodu, Julio Arce, who’s a four-time ROC Bantamweight Champion and three-time ROC Featherweight Champion, with a UFC record of 3-2, with those only two losses coming via split decision, Chris Fishgold, who’s a four-time Cage Warriors Lightweight Champion, and now Chase Hooper, who appears to be a 20-year-old prodigy. It’ll be interesting to see what the UFC has next for Teymur. He stands 5’5” with a 69” reach, and is now 32-years-old. If he’s going to pick himself up and go on a streak, now’s the time. 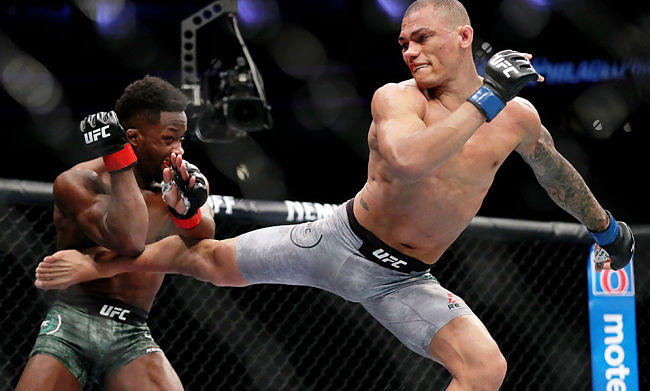 Sheymon Moraes made his UFC debut back in 2017 as well, against Zabit Magomedsharipov. That’s a tough debut, he lost the fight via submission (anaconda choke) with just 30 seconds left in the fight. He went on to win his next two, before losing his last two, bringing his UFC record to 2-3. He also fought Marlon Moraes for the WSOF Bantamweight Championship back in 2015 before joining the UFC, a fight he also lost via submission (rear naked choke) in round three.

Moraes started out his combat sports career practicing judo, achieving the rank of purple belt before leaving the sport at age 12. He then started training BJJ, kickboxing, and muay thai. After becoming a five-time national champion in kickboxing and muay thai, Moraes started his MMA career. Moares stands 5’8” with a 72” reach, and is now 29-years-old, he’ll be approaching his peak in the next couple years here. 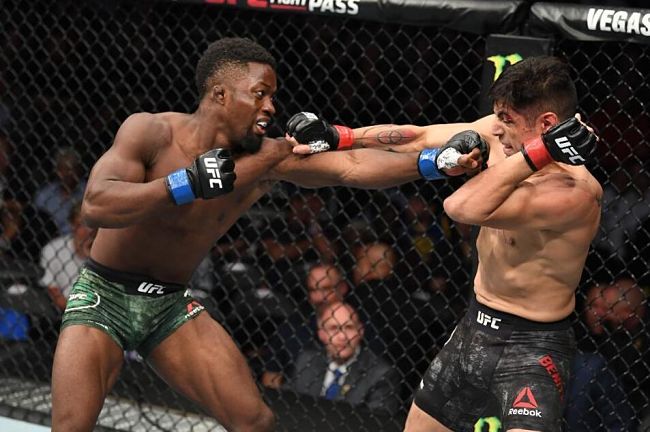 ‘Super’ Sodiq Yusuff is on a lot of featherweights radars at this point. He’s had less than two years inside the UFC, but is already 4-0 with the promotion. This Nigerian powerhouse came to the UFC after his Contender Series win over Mike Davis, and has defeated Sheymon Moraes, Gabriel Benitez, and Andre Fili in his last three fights. Now, Yusuff will say himself he’s more of a grappler than a striker, coming from Lloyd Irvin’s camp, but he has all the power in the world, and six of his wins come via knockout without a single submission.

This is because he’s a natural athlete that picks things up quickly, along with him being 5’9” with a 71” reach, it helps him reach his opponents with that brutal power having a couple extra inches on his arms. He just turned 27-years-old as well, he has a ton of time to polish up his game even more. Not to mention, Yusuff only started his mixed martial arts career in 2016 when he was in his early twenties. That’s a tad bit of a late start, meaning he probably won’t burn out as quickly as someone who say started when they were a teenager. Mix that with his Nigerian blood, we’ll be seeing Yusuff for some time to come.