We had an incredible comeback night of fights this past weekend at UFC 249, and there were a couple less than favorable outcomes to end the night. Dominick Cruz was somewhat robbed of his return, and Tony Ferguson won’t be fighting Khabib Nurmagomedov any time soon, if ever. That’s not to say that the co-main and main event weren’t great fights, they were, and a huge congratulations to Henry Cejudo and Justin Gaethje, but it is unfortunate. We may never see the most anticipated match up in mixed martial arts history, and we may never see Cruz, or Cejudo fight again. Many of us got used to the fact that we may never see ‘The Dominator’ compete again, but ‘Triple-C’?

Firstly, we’ll start off with the co-main event. This was a great match up that excited many as soon as it was announced, and it didn’t disappoint, aside from the referee. Cejudo came out with a great game plan, which was to kick Cruz’s legs constantly and make him less mobile. We won’t know how much of an effect they had because it was stopped at 4:58 of round two. Most people believed Cruz would be the one throwing leg kicks, as he always does, but Cejudo was the one making them effective off the jump.

Cejudo won round one 10-9, but it looked like Cruz was finding his range in round two, and he perhaps even won the round, aside from the late knee and finish. The fight was just starting to pick up, and it was getting more and more competitive as the minutes went on. With about 25 seconds left in round two, Cejudo and Cruz clashed heads, opening a cut on the champion. Seconds after the action was resumed, Cruz got caught with Cejudo’s knee, and he was badly hurt. However, he was regaining composure and attempting to stand up, and it was working. He was almost to his feet before referee Keith Peterson stepped in to stop the fight. 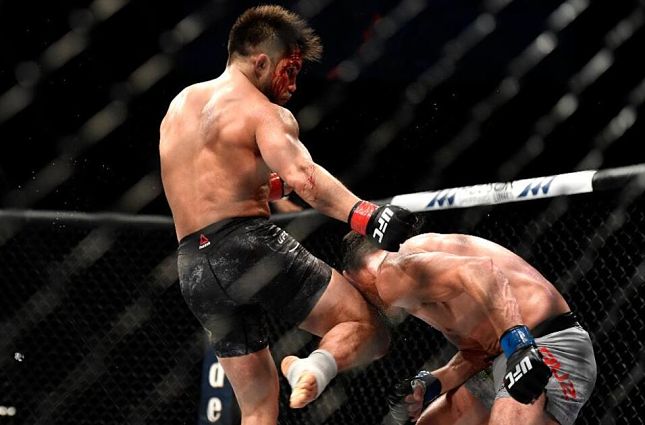 ‘The Dominator’ stated that Peterson reeked of cigarettes and alcohol, and he isn’t the type of person to say things that aren’t true. Cruz hates excuses. He doesn’t make them for himself, and he doesn’t let others make them, and he thought it was an early stoppage. Coming from a straight up, humble, logical individual like himself, that says something. Not everyone hated the stoppage however, some thought it was just, but some others disagree.

Cruz came back after three years to viciously KO Takeya Mizugaki in 61 seconds, then was out another fifteen-and-a-half months before challenging TJ Dillashaw for the belt. He did it then, he was able to recapture his bantamweight crown, and he was given that opportunity again, but it was taken from him. It’s one thing to stop a regular fight early, that’s plenty bad enough, but this was a world championship fight. Not to mention the person on the receiving end has defied all odds before, and he was on his way to his feet while the round was ending.

‘Triple-C’ stated after the fight that he’s walking away from the sport, this is another incredibly unfortunate thing. Cejudo only won the UFC Flyweight Championship less than two years ago, he hasn’t been on top for very long. He’s certainly done a lot in that amount of time, for himself and the sport, but we were just beginning to see his true potential, and now he’s done. The heart and grit Cejudo has, it’s not something that should be wasted. He could easily go down as the best ever in many peoples minds if he stuck around a little longer and had at least two or three more fights. He’s done it all, except rule a division for a period of time.

It’s so hard to watch the best in the world walk out on top. Though that’s what every athlete wants, and their fans, it almost never happens. When it does, it seems no one wants them to. The only mixed martial artist to ever do that goes by the name of Georges St-Pierre, and now Henry Cejudo.

The only thing is, Cejudo’s reign was much, much shorter, and he didn’t avenge both of his losses. He had the chance to defend his flyweight title against Joseph Benavidez, but he decided to stay at bantamweight. Had he done that and won, he would have avenged the only two losses in his entire career as well. 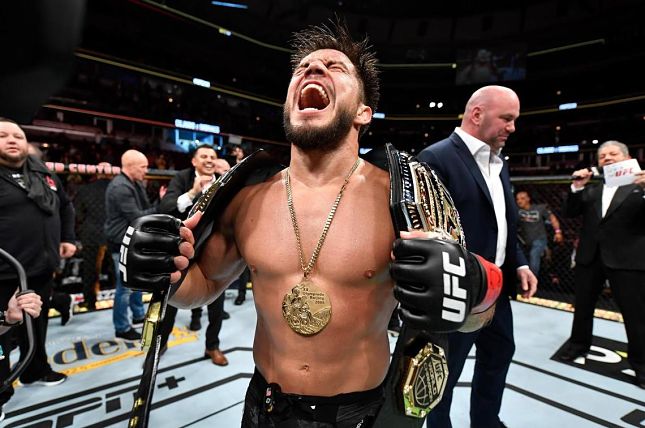 It’d really be a shame to have to wonder what else he could do, he’s unbreakable. The tenacity he fights with once he feels his opponent is doing well, it’s unmatched, and great things have come from it. Not to mention his ability to adapt between fights, and mid-fight. He really is a chameleon, as he calls himself. We only have four of those performances of his to reflect on though. He won the UFC Flyweight Championship and defended it once, then won the UFC Bantamweight Championship and defended it once. There’s so much more he can give as a fighter.

The main event was a great fight too, but also had a relatively unfavorable outcome. There’s nothing wrong with Justin Gaethje winning the interim UFC Lightweight Championship, it’s well deserved and everyone loves him, but now we may never see Khabib Nurmagomedov versus Tony Ferguson. There was so much behind that match up. From them each being on twelve-fight win streaks in the most stacked division in MMA, to Ferguson having cut up his last eight opponents while Nurmagomedov has never been cut, to the fact that Ferguson accepts bottom position in a lot of his fights, this was the fight we all needed to see.

The last time Ferguson lost, women didn’t even fight in the UFC yet. The flyweight division was only two months old, Conor McGregor was on welfare, and four current UFC champions didn’t have a single fight yet. That’s right, Kamaru Usman, Weili Zhang, Alexander Volkanovski, nor Henry Cejudo had made their mixed martial arts debuts yet. Israel Adesanya was also just 1-0 at the time, not to mention it was a fight ‘El Cucuy’ broke his arm in.

That’s the last time he lost, and the champion has never lost, with a perfect 28-0 record. There wasn’t a better fight that could be made. Nurmagomedov versus Gaethje will be an incredibly entertaining fight, but it’s unfortunate we couldn’t have gotten both.

‘El Cucuy’ could get a couple good wins and be right back in the mix though, right? Given the fact that the champion only fights roughly once a year, that’s possible. However, the head damage Ferguson took against Gaethje, along with the broken orbital bone he suffered, he won’t be back any time soon. Not to mention, he cut to 155 lbs twice inside of three weeks, that’s not good for anyone. He needs to recover a little before even considering a return.

‘The Highlight’ looked incredible all night, and walked away merely unscathed, aside from being rocked by an uppercut by Ferguson late in round two. Other than that, he had a perfect night. The strike totals were actually pretty close, 143-136 in favor of Gaethje, but that doesn’t tell the story of the fight. Gaethje landed countless hard punches and hurt Ferguson a few times, but never dropped him. The fight was stopped at 3:39 of round five, and we again have an interim UFC Lightweight Champion for Nurmagomedov to fight.

Now we get to see Nurmagomedov fight Gaethje, and that’s an insane match up in its own right. Gaethje came out and said he was never the best offensive wrestler, but he’s always had great takedown defense. Maybe that’s one reason he never goes for the takedown, aside from the fear of gassing himself out like he’s stated before. That could be very interesting. If Gaethje can keep Nurmagomedov from taking him down, their fight may look very similar to his fight with Ferguson.

UFC 249 was a great card from start to finish, it’s such an amazing thing it was even pulled off. And now we have the UFC Fight Night: Jacksonville cards to look forward to on May 13 and 16 this week, and another one in Las Vegas on May 23.