Empire FC 3: Ladies of War took place this past weekend on Saturday August 31, 2019 from the Biloxi Community Center in Biloxi, Mississippi. Though a handful of fighters were unable to make the event due to the hurricane, the matchmakers were still able to put together an action-packed 14 fight card consisting of combat Jiujitsu, Jiujitsu, and MMA bouts. Here are the highlights and a summary of the event. Make sure to visit our Facebook page at MMA Tribune to see the gallery consisting of over 1,000 pictures from fight night.

One of those last second additions to the card was an exhibition kickboxing bout between Cam Teague and David Sullivan. Sullivan started out strong with his cross finding the mark. Teague battled back and landed a solid jab-cross combination that dropped Sullivan. The rounded concluded with both strikers going for the knockout blow.

Round two began how the first round ended with a flurry of strikes on both ends. Teague continued with the pressure leading to another knockdown. Teague knew the victory was in site and continued laying on the pressure until the referee stopped the bout. Due to the bout being an exhibition, a winner was not declared.

The next bout of the evening saw former UFC star Jason Knight battle former Island Fights fighter, Mike Barnett. Both fighters displayed their high level of combat skills, landing, powerful well placed combinations. All three rounds were closely contested with each finding their strides at different points throughout the contest. Barnett did a great job early in the contest catching Knight’s attempted body kicks. As he bout went on, Knight’s volume of strikes helped him maintain the pace. This exhibition was an amazing showing for the fans.

Young Ones Putting on a BJJ Show

There were two BJJ bouts consisting of young females who are all four bound for big things as they age in the sport. The first bout saw Augusta Shaw take on Jaidyn Aguon Guirola. Both competitors were very scrappy with Augusta attempting a triangle choke early but Jaidyn was able to break free. After some solid ground action, Augusta took the back of Jaidyn and locked in the rear naked choke for the victory.

The second matchup saw just as much ferocity and action as the first BJJ matchup. Young Willow Dixon battled Addyson Coty which saw Addyson lock in an early guillotine choke. It was hold it in for quite sometime before Willow was able to turn the choke into a Von Flue choke. Both young competitors battled hard in this bout.

The night continued with a handful more of BJJ matchups before the MMA action entered the card. Alpha 06 BJJ based out of Baton Rouge, led by Josh and Sarah Davila, came out in full force for the night’s next two bouts with Taylor Harris and Kassidy Walsh both representing in their respective bouts.

The first bit of action saw Rachel Cain on top in control of Alpha 06’s Taylor Harris. Harris was able to break free and bring the contest back to the feet. It was Harris’ turn to take charge and slammed Cain to the mat and working her way to an armbar. Cain had no choice but to tap to Harris’ armbar. 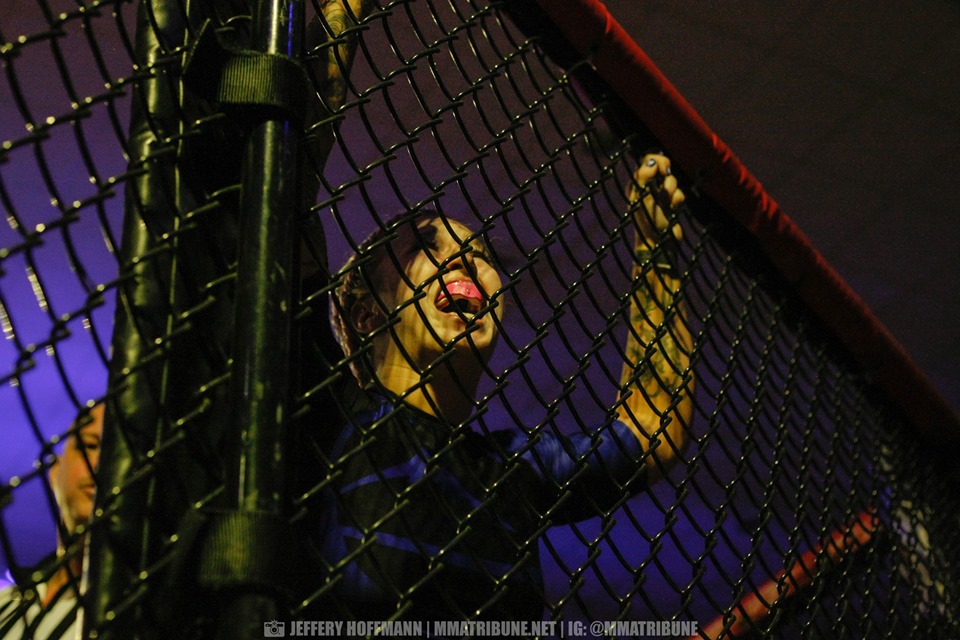 Harris celebrating after her victory.

The next BJJ bout of the night saw Mona Bailey show her amazing skills against a tough opponent in Kassidy Walsh. Bailey started it out with a takedown and top control. Walsh was able to reverse the position and ended up on top. The ending sequence displayed great skill by the teenage Bailey who locked in the triangle choke and eventually rolled it to a top position. Walsh tried her best to get to the cage to potential break free but Bailey kept tight the hold and pulled out the submission victory.

First MMA Action of the Night

Our first MMA action of the evening featured Jennie Bonfiglo standing across the cage from Xtreme Couture’s Allysen Breeden. Breeden came out the gate first but Bonfiglo was able to lock in a gullotine on the mat. Breeden followed it up with a big slam but could not break free. Eventually Breeden got free and took Bonfiglo’s back, raining down shots. The unanswered shots by Breeden led the referee to call for the matchup giving Breeden the first round TKO victory.

Alpha 06’s leading lady, purple belt Sarah Davila, took on double duty in the combat BJJ world with her first bout against Ashley Wagnon. Davila started out quickly acquiring the dominant position and delivering heavy slaps to Wagnon. Davila adjusted her position a few times but continued with the heavy slaps eventually leading to the referee stopping the action declaring Davila the winner.

Potential Fight of the Night

One of the brightest spots of the night came from Katelyn Nicdao and Anneka Berryman. This three-round decision was fought on both ends and could have easily won fight of the night honors. The first round started out with Anneka landing some big combos. Katelyn maintained her composure and landed some heavy jabs. Anneka followed it up using her height advantage to lock up a Muay Thai clinch and delivery heavy knee shots. The clinched knees looked to tire Anneka a bit as she started to drop her hands and Katelyn’s lead hook started to find it’s mark. Katelyn ended out the round with some nice body combos.

Round two saw Anneka regain a bit and pick up the pace and pressure. This round saw a bit more of cage action with both in control of the other at times. There was not as much high pace action compared to the first round but both fighters looked methodical and systematic in their planning of the round.

The final frame was more like the first round with both fighters landing heavy strikes. Anneka went back to her advantage, the clinch, and drilled in knees to the head and body. After finally breaking free and regaining herself, Katelyn landed a high kick preceded by a couple of solid Anneka jabs. The contest rounded out with Anneka getting one last series of knees via the clinch. When it came time for the decision to be read, the judges selected Katelyn Nicdao via split decision.

Another Xtreme Couture product based out of New Orleans, Kelly Ziemba, put on an impressive performance against Rebekah Rotenberry in the Empire cage. This was a typical “striker vs grappler” matchup with Rebekah showing a solid jab with great head movement off the center on her strikes. Once the contest went to the cage, Kelly took control and delivered a slam takedown ending up in half guard. Rebekah tried to lock in an armbar but Kelly was able to roll out of it quickly. Kelly ended the round still in top control and raining down controlled strikes.

Both fighters used their striking to start off the second round. Eventually Kelly landed a single leg takedown to get the bout back to the ground and ended the round similar to the first with big left handed shots. The final round saw both fighters coming out swinging big. Kelly pinned Rebekah to the cage and returned the bout to the ground. Kelly worked her way to full mount while Rebekah did her best to try and wall-walk to escape. After the continued big strikes from the top, the referee was forced to stop the bout and declare Kelly Ziemba the winner via third round TKO.

The night was full of very closely contested MMA bouts. The bout between ground specialist Sara Monzeglio and Hanna Olson served no different. Sara came straight out the gate with a takedown. The majority of this round, and the bout as a whole, mostly took place on the mat with Sara remaining very active looking for a submission at every opportunity. Olson sprawled the opening takedown of the second round but eventually Sara assumed control and attempted a few ankle locks just shy of earning her the victory.

In the third round Sara switched up her opening round method and threw a few solid leg kicks. After shooting for the takedown, Olson sprawled again and took the top position. The bout returned to the feet then back to the ground just as fast. Olson took the control on top moreso holding Sara at bay than taking a shot at a submission. Sara made her last submission attempt as the round came to an end, going for an ankle lock. When the decision came in, it was announced Sara Monzeglio was the winner via split decision.

For the second time on this night, Sara Davila entered the cage for another combat BJJ bout. Her opponent across the cage is a woman just as dangerous, Macy Breaux. This matchup delivered as expected from two great technicians.

Both competitors looked for a way to get the other down but the opportunity just was not there for either purple belt early on. With time running one in the one-six minute round, Davila pulled Breaux down into her guard. Breaux utilized her first chance to land slaps but neither competitor was able to do anything in regular time to win.

The overtime consisted of a winner being declared by earning the quickest back escape. Breaux started with Davila’s back first and did a great job keeping the back. After the switch, Breaux was able to break free quickly earning the victory in overtime.

The co-main event of the night featured a combat BJJ matchup between Griffin Fisk and Monica Medina. Medina started off the action getting a trip takedown. Fisk took control on the ground though and continued her pressure for several minutes. Medina was unable to break free from the reverse triangle and was forced to tapout.

Both fighters came out looking to take control of the center of the cage. The two eventually ended up tangled on the cage with Guy having her underhooks in. Hracho was able to score a trip takedown on one of the clinch ups against the cage. Once on the ground, Guy attempted a triangle choke but Hracho was able to break free and attempt a rear naked choke as time expired.

Hracho came out the gate with a heavy cross shot followed by another. Guy was able to press Hracho on the cage. After a brief battle on the cage in the clinch, Guy landed a few knees. Hracho continued to throw heavy jabs and crosses that were finding the mark. Guy showed a great chin, eating the best shots coming her way. The rounded ended with Hracho throwing a solid double jab combo and another heavy cross.

Hracho (right) throwing one of her overhand rights.

Round three looked to be the deciding round heading into it with both fighters neck and neck at this point. Hracho continued to display her outstanding striking with a solid combo. Guy was able to land a big takedown to change the momentum of the bout. After the big takedown, Guy was able to pressure and get the back of Hracho to lock in a rear naked choke attempt. Though the attempt was broken up, Guy kept back control most of the round leading to the bell ringing to end the bout. It was an extremely close contest with the judges ruling Hracho the winner via split decision.