You will be hard pressed to find a combat sports athlete more active than Macy Breaux. After receiving her medical clearance after a near year long layoff, Breaux has been extremely active since May 2019. That active streak looks to continue when Breaux steps back in the cage to compete with Sarah Davila in a combat Jiujitsu match at Empire FC 3: Ladies of War. Empire Fighting Championship is one of the top combat sports promotions on the Gulf Coast. The event will be headlined by a kickboxing bout between former UFC fighter Jason Knight and former Island Fights and LFA veteran, “Iron” Mike Barnett.

Pedal to the Metal

Due to an unfortunate injury sustained in her bout at Warrior Games 2 in June 2018, Breaux was forced to be unable to continue the matchup. The injury caused her to give up much more than that, not allowing her to compete until May 2019 when medical clearance was finally granted. “So I got medically cleared to fight after my year lay off at the end of May. On June first I took a boxing match for Compete for the Streets (a local boxing promotion ran by Kenny Bayhi) I won that fight,” Breaux stated. “Then a week later I did a boxing match in Kenner and was also victorious. Wanting to keep the ball rolling I did IBJJF New Orleans and placed third because typical Macy was over ambitious and went for a bow n arrow with 15 seconds left over getting my hook in for 4 points. Then I recently had an MMA fight for Bayou FC against Amber Medina, and was victorious. I was able to showcase my wrestling and BJJ this fight and I loved being back in there and I was ready to bounce back and get right back into training for the next on August 31st!” 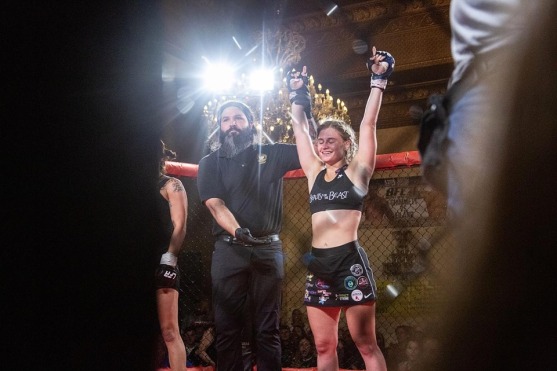 The Empire FC 3: Ladies of War card set for Saturday August 31, 2019 in Biloxi, Mississippi inside the Biloxi Convention Center is a rarity. Fighters such as Gina Carano, Ronda Rousey, and Misha Tate drastically increased the popularity of WMMA to the casual fan base. Now there are organizations such as Invicta FC which are all-female based and serve as a feeder program to the UFC.  “I think being on an all-female card is really amazing. I always love seeing other women fight, and get recognition,” Breaux stated. “So not only the fact that they have an all-female card locally is amazing, but I get to be part of it. I really love Invicta and keep up with that promotion which is an all female promotion. So to be part of something similar locally is great!”

Breaux is one of those “must watch” fighters. A very low percentage of MMA fighters, regardless of gender, can compete at a high level of one art like Breaux does in Jiujitsu and boxing. Her matchup with Davila will pit Louisiana’s two best female combat sports athletes in the cage together under combat Jiujitsu rules. Combat Jiujitsu is relatively new to the masses. The only major rule change from standard Jiujitsu bouts is the fact that open palm strikes are allowed. No matter the rule set at hand, Breaux is one of the faces of Louisiana’s female combat sports movement because of her hard work, her absolute dedication to whatever she’s doing, and her ability to put on a fight of the night performance every single time the bell rings.