This weekend, UFC Strawweight Champion, Rose Namajunas returns to action for the first time in a year. She will attempt to defend her title against the always dangerous, Jessica Andrade. This will be Jessica’s first fight in just over half a year, and her second UFC title shot. She fought Joanna Jedrzejczyk back at UFC 211 two years ago and lost via unanimous decision; this was Joanna’s last title defense, before Rose took it from her at UFC 217, and defended it against her at UFC 223. Oddsmakers have Jessica Andrade as a slight favorite, I’m not sure how though. Yes, Jessica has a great shot at winning this fight, but so does Rose.

Rose has spent the last year rehabbing her spinal stenosis, something that happened while she was training with the Shevchenko sisters in 2017; the symptoms got worse during her camp for UFC 223, and she took time off considering. Now she’s back at one hundred percent, and ready to defend her title for the second time. Rose Namajunas was looked at like she was the next big thing on The Ultimate Fighter 20, and she made it to the finals with all three in-house wins via finish.

In the finals, she fought former Invicta FC Strawweight Champion, Carla Esparza, and lost the fight via rear naked choke in round three. She has grown and evolved immensely since then, it’s kind of unreal how good she’s gotten since that fight, she was already so talented at such a young age. No one expected her to win the title against Jedrzejczyk, she was thought of as a lamb being sent to slaughter, but she’s the one that did the slaughtering; she defeated the 37-3 amateur kickboxer, 27-3 professional kickboxer Joanna Jedrzejczyk via knockout in the first round. She then rematched, and defeated Joanna again, this time via unanimous decision, 49-46 across the board. 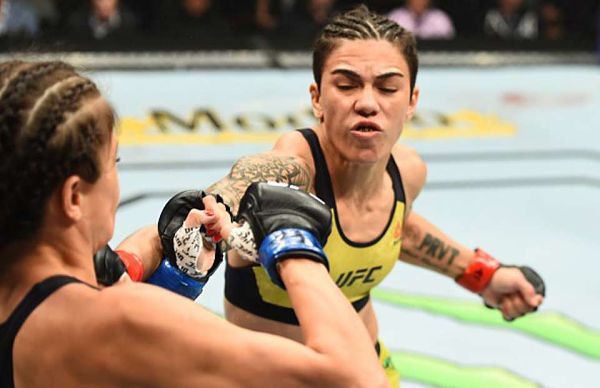 Jessica Andrade has been in the UFC a little longer than Rose, and started out at bantamweight believe it or not. It really amazes me that she did well at 135 lbs, considering once the UFC opened up a women’s flyweight division, she didn’t go up there, she stayed at strawweight. She must not have had to cut any weight at bantamweight. She’s gone 6-1 at 115 lbs, with her only loss to former champion, Joanna Jedrzejczyk. Many think of Andrade as a female version of John Lineker, or Wanderlei Silva; it makes sense, she fights just like them. She’s done very well in her career, and is still only 27 years old. Rose is quite young as well, she’s still only 26 years old.

Though Rose is only 8-3, she’s 4-0 as an amateur with two TKO wins, and two decisions, and she went 3-0 on The Ultimate Fighter, with three submissions. That’s a total MMA record of 15-3, against Jessica’s 19-6. Both women are skilled on the feet, and on the mat; both Rose and Jessica are BJJ brown belts, and Rose holds black belts in both Taekwondo and Karate. Rose is three inches taller than Andrade at 5’5”, and also has a three inch reach advantage. I think that may be big, that could make quite the difference in this fight. This is a very high level Women’s MMA match up, and I’m very excited to see it! How does it play out?